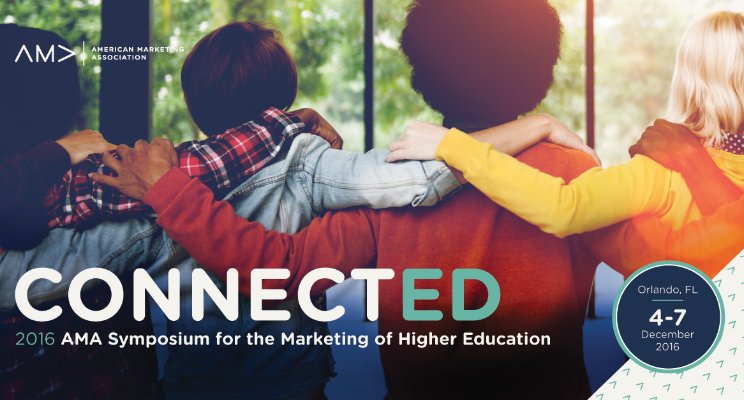 December tends to inspire moments of reflection on the year that was and big picture thoughts on the possibilities of what the New Year will bring. Throw in a ceremonial raising of the glass for some liquid-induced cheer and you have the elixir for what went down earlier this month at Higher Ed Marketing’s festivus – #AMAHigherEd.

StoriedU (and yours truly) was there to discover, learn and teach among the marketing industry’s movers, shakers and up-and-comers. We walked away with five themes that bubbled up to the top of our key takeaways.

Universities significantly underestimate their potential place in the media landscape.

Richard Edelman’s (CEO of Edelman, the global PR & communications firm) keynote speech inspired quite a social media stir as he chronicled four fundamental pressures on Higher Ed, including the implosion of mainstream media. Edelman prophesied a vision state for universities where an Engagement Officer orchestrated marketing and communication silos to help schools act as agents of social impact in the world.  He even coined Higher Ed as the potential “Fifth Estate”, which is a clever framework.

I’ve often talked about universities as needing to embrace more of a media publisher mentality, whether it is by target demographic or subject matter. With the erosion of media trust (fueled in part by the proliferation of fake news) and dilution of vanguard media brands, I feel there is enormous opportunity for name brand universities to become credible members of the Fourth Estate.

Harvard Business Review leveraged their brand to become a gold standard member of business advice in the print era. It’s only a matter of time before universities connect the dots on leveraging their vast array of intellectual capital and streamline their content generation to become formidable players in the new landscape.

Centralized marketing is going from “crawl” to “walk” phase and university relations departments will have to submit to change.

Not many people are big fans of change. It’s even more pronounced when those ruling the communications roost have been doing so for so long. As marketing departments continue to grow and flourish, the clunky mergers of marketing and university relations departments is continuing to happen. It’s not always pretty.

Several of my conversations at AMA Higher ED revolved around the challenges of marketing teams trying to corral individual silos and departments to “buy-in” to consistent brand look and feel. These conversations were usually about tactics like logos and brand language consistency, but almost all of them laddered up into bigger picture issues about the transformation of the old-guard, old-school public relations mentality of university relations departments. The change is on and so are the growing pains.

A research-based approach to inform redefining your brand is now a given.

There were several in-depth presentations on university rebranding efforts; Northwestern, Butler, NC State and Missouri University of Science & Technology were just a few of the compelling efforts. The message from each university’s marketing exec was consistent – create baseline perceptions with real marketplace data, use the data to inform the key insights and create ways to measure the branding efforts.

Every one of these rebranding efforts started with an engagement with Simpson Scarborough. Data-driven market research is now a given to inform the authentic brand story. This also helps when priming university budget funders, like CFOs, to dispel the myth a rebrand is about logos and taglines.

Check out our recent Q&A with Jason Simon on how to develop a successful re-brand with lessons from Butler University.

College marketers need help transitioning from rebrand/campaign launch to a way of being.

The flip side to the #3 takeaway is many AMA Higher Ed attendees seemed to be clamoring for the post-rebrand efforts.  Co-Chair Jason Simon said he dislikes the term “campaign” since it implies a beginning, middle and an end, yet bringing a brand to life is a daily effort.

#AMAHigherEd – would anyone want to see a presentation on "You just rebranded your University…now what?" Seems to be a common question

One of my favorite presentations involved integrating VR and AR into the prospect journey, from Boston-based, Primacy. Their team, working with Regis University’s admissions department, did just that with a virtual reality strategy that wasn’t just a new trend, but a strategic part of telling the brand story.  Their execution has rocked traditionally stodgy college fairs and produced bottom-line results of double-digit application increases.

Primacy’s Jeff Johnson shared the near future of augmented reality with real live examples of how interactive campus maps may play a role in on-campus recruiting. The visuals were powerful and the creative spark was immeasurable. Those who integrate these tools strategically and quickly will also reap the biggest rewards.

Let me know what you took away or what you want to hear more about and we’ll make that happen. It was an honor to present on using your facilities as marketing touchpoints and a special shout out to Paige Booth at St. Edward’s College for her fascinating case study on servicescapes –   a post that you’ll be reading about in the New Year.

Thanks @LARRYTRON ??
If you're interested in branding a new campus building, check this out: https://t.co/ohusBsjUAa https://t.co/Q2MBlDisXO